Jeddah, Saudi Arabia: Like the rest of the Persian Gulf region, Saudi Arabia saw an explosion in consumer spending over the past decade due to the bourgeoning global energy demand. Per capita income is about US$15,000. GDP has grown a robust 16.9% in the past year and is expected to grow 8.8% next year. Not all growth is oil-related: non-oil private sector growth was about 11% last year.[1] Saudi Arabia arguably is one of the fastest-growing and least risky emerging market investments.
Saudi Arabia’s population is about 25 million, which is expected to double within the next 20 years. Almost 73% of the total population in the country is comprised of Saudi nationals while the rest are foreign workers. The population is growing at a rate of 2.3% annually, with 70% under the age of 30.[2] This bodes well for Western food products and restaurant concepts.
Per capita food consumption through 2015 is forecast to grow 7.31%, outperforming other Gulf countries which have relied heavily on expatriate consumption. In particular, the confectionery category is expected to grow 9.44% annually for the next few years. While consumption trends are positive, it is important to note that Saudi consumers are fairly price sensitive compared to most of their regional peers, and therefore products at the low end of the price range are likely to remain particularly popular.

Grocery and hypermarket sales are expected to grow a sizzling 14% annually over the next five years. New store openings across these channels will continue to support the structural transition from unorganized to formal retailing. Organized retail currently accounts for only about half of total grocery sales; however, with the young population and high income growth, modern retailing is forecast to contribute 70% by 2019.
However, given their high exposure to Western-style restaurants and diet, sedentary lifestyle, and expansion of supermarkets, Saudis have one of the highest obesity rates in the world. According to the Ministry of Health (MOH), 51% of Saudi women, 45% of Saudi men, 36% of teenage boys and 29% of girls are obese. The country’s overall diabetes rate is 30% and growing rapidly, particularly among children (Saudi youth prefer to eat Western-style fast food rather than traditional cuisine).[3] 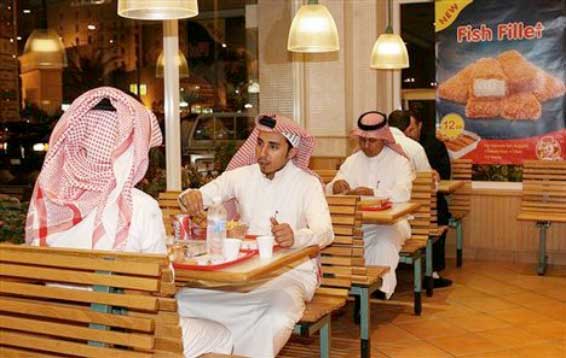 Therefore, Saudi consumers of diet foods and nutrition products are described as health conscious, living in big cities, educated, medium to high income and prefer shopping in class A supermarkets over wholesalers. Food products in general, including diet foods, produced in the United States are generally viewed as meeting higher quality standards compared to imports from other countries and those produced locally. The Saudi market offers strong potential for increased imports of diet foods over the next five years, especially condiments, dairy products, sodas, drink mixes, snacks, and confectionery goods.
Despite the enormous growth opportunities, Saudi Arabia is a difficult market to enter. All products must have Arabic text on the packaging, follow a rigorous import licensing procedure, and must be halal (all foods are considered halal except swine/pork, alcohol, improperly slaughtered animals, carnivorous animals, and food contaminated by any of the aforementioned items). Many manufacturers take the next step and obtain halal certification which assures Muslim customers that the product is permitted. Exporting companies should also expect to support a sustained marketing campaign once on the retail shelf. Saudi retailers demand not only listing fees but continual marketing such as in-store sampling, temporary price promotions and advertising in store flyers. The investment for an imported brand is neither quick nor inexpensive; however, if a brand considers Saudi Arabia a strategic market and is patient and willing to commit to at least a 5-year plan, the market has been proven to be very profitable.