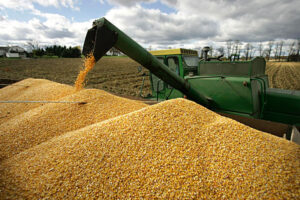 Global food prices reached unprecedented highs recently, and are 36% higher vs. the same period last year. Many food crops are expected to see expanding production next year as farmers seek to exploit high prices, but weather in the U.S. and Europe may limit crop yields.
U.S. food and beverage processors this year have had to confront not only these huge commodity cost increases, but also retailers pushing back on price rises and consumers reluctant to spend on premium products. But there is a silver lining: a weak U.S. dollar.
While manufacturers experience higher input costs for commodities such as cocoa, sugar and coffee, exporters can realize higher sales and enhanced profit margins. U.S. exporters are reaping higher sales because the U.S. dollar has devalued significantly, already 10% vs. the Euro in 2011. The dollar has not only devalued against the Euro, but is at the lowest level since World War II against the Japanese Yen. The Yen fell to Â¥80.13 to the U.S. dollar recently, remarkable given the sluggish economy there still reeling from the devastating earthquake, tsunami and nuclear crisis. The safe-haven Swiss franc is also at record low levels now, CH 0.87 vs. the USD, a record high for that currency.
The U.S. dollar is 13% lower than it was 30 years ago against a basket of major foreign currencies. It is 28% below its peak in 2002. It is at a 29-year low vs. the Australian dollar, and a 3 Â½ year low vs. the Canadian dollar.
Without any change in the Fed’s low-interest policy in the foreseeable future, we can expect countries with higher-yielding currencies to continue strengthening vs. the U.S. dollar. Developing economies such as Brazil, China and other emerging markets which are growing robustly and raising interest rates will have currencies that appreciate significantly against the U.S. dollar. While the Fed continues with its quantitative easing program of pouring $600 billion in stimulus funds into the U.S. economy, the European Central Bank is beginning to raise interest rates toward a tighter monetary policy.
Should Americans be worried about the dollar’s free fall? Yes and no. The Federal Reserve has directly caused the dollar’s decline by printing money in an effort to stimulate the U.S. economy (quantitative easing). We have a high supply of dollars and low demand. In addition, the Fed has kept interest rates in the U.S. at record low levels. Investors naturally place their funds where interest rates generate higher returns, which is now Europe and countries with natural resources and commodities. Undermining the U.S. dollar is also the massive federal budget deficit and looming inflation. This issue is being debated heavily in Congress, while our Standard & Poor’s AAA credit rating is in jeopardy. Finally, China is hinting that it may diversify their $3 trillion in cash reserves from the U.S. dollar to other currencies.
There is a danger that the U.S. dollar will crash in a free-fall. If that happens, U.S. stocks and bonds will fall significantly, U.S. interest rates will rise, and the economic recovery will falter. A weaker dollar also contributes to higher inflation, higher gas prices at the pump, and a diminished standing of the U.S. in foreign policy circles. In essence, Americans will be able to afford less of what the world sells.
We hope that the stewards of the U.S. economy recognize this peril and will take measures to avoid these events from occurring. However, few believe that the U.S. Federal Reserve will raise interest rates anytime soon, hence the dollar swoon. U.S. unemployment needs to show signs of improvement before the policy wonks at the Federal Reserve will consider raising interest rates.

In the meantime, U.S. manufacturers and service providers should consider increasing exports. U.S. products are at their cheapest levels in decades for most foreign buyers, and continue to be in high demand due to their perception of quality, durability and wholesomeness. Exports contributed nearly 50% of the entire U.S. Gross Domestic Product growth in 2010.
If you have not developed a strategic export sales plan, you may be missing opportunities to generate higher sales and profits for your business.