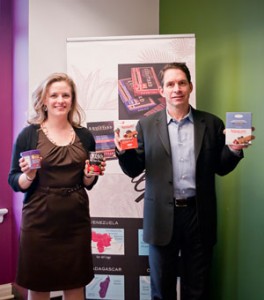 Located on the sixth floor of the venerable Fourth Avenue Building in Seattle’s historic business district is a high energy, contemporary office that is home to a local small business that helps other area small businesses succeed in international markets. Athena Marketing International (AMI) is a ten year old company that specializes in helping US based food producers and manufacturers expand into foreign markets. Working throughout the office are friendly young professionals who move with purpose and focus and on display in the office are samples of new and developing food products.

After graduating from Pomona College in Southern California, Peter Guyer, founder and owner of AMI, went to work in Southeast Asia in international trade. Then he returned to California where instead of going to law school, as at first expected, he went on to earn an MBA from the University of Southern California. Next he accepted a position with NestlÃ© S.A. based in Switzerland where he coordinated export sales to Asia. There he saw how Nestle Swiss sold 98% of its products globally. In time he became concerned that, although there are many great US based food manufacturers with great products, most simply don’t know how to market outside the US. Given that only 5% of the world population is in the US, this means that these companies are missing 95% of the consumer market. So in 2003 Peter took the bold moves of returning to the US, moving to Seattle, and starting a business (Athena Marketing International) — three major life changes at once. Now ten years later, when asked if he has any regrets about not going to law school, he smiles broadly and says, “No regrets. I love what I’m doing!”