Brazil is the world’s 7th largest economy in terms of Gross Domestic Product (GDP). It has a free-market system and the 2nd largest economy in the Western Hemisphere. Brazil is one of the fastest-growing major economies in the world, with a GDP growth rate in 2010 of 7.5%. Finally, Brazil is expected to become one of the five largest economies in the world within the next decade.
Brazil is also a major consumer of food. With a population of 191 million, Brazil is one of the world’s leading consumers of cereals, pulses, and meats. Domestic demand is likely to grow as Brazil’s population gains 23 million people by 2018. Income growth, a more balanced income distribution, more women in the work force, and increased urbanization are expected to lead to higher demand for imported packaged foods. The U.S. is the largest import partner of Brazil, with a 15% market share of total Brazilian imports.
While imports to Brazil face some barriers including an 18% Value-Added Tax (VAT), there are several U.S. food and beverage brands performing well in Brazil. South American countries enjoy duty-free status or reduced duty rates, which make U.S. products less price competitive. Nonetheless, the barriers are not insurmountable, and U.S. companies that expend the time and resources to enter the Brazilian market are well-rewarded. The recent 20% appreciation of the Brazilian real vs. the U.S. dollar is helping U.S. brands become more competitive.
Both European and U.S. food and beverage exporters target high-end consumers, which number about 30 million Brazilians (more than the population of Australia). However, E.U. countries promote their products more aggressively in Brazil than their U.S. counterparts, offering price discounts and free product samples to their import customers. In 2010, the European Union exported US$698 million to Brazil, a 22.2% growth over 2009. The U.S. exported US$204 million, growing 6.5%. Since 2006, the E.U. has enjoyed compound annual growth in food exports to Brazil of about 22% vs. the U.S. 7%. 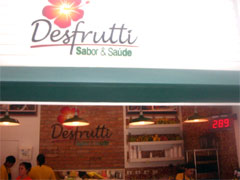 Due to the Brazilian’s focus on health and appearance, all-natural and healthful food and beverage products are well-received in Brazil. High-quality, sophisticated and innovative products are prized by savvy Brazilian consumers.
Clearly, there is a demand for U.S. food and beverage products in Brazil. The U.S. agriculture and food industry needs to conduct more sustained and targeted marketing in Brazil in order to compete effectively with European companies that have built a premium image. U.S. companies that develop their brand awareness to a growing Brazilian middle- and upper-class, will reap the benefits of long-term sales. In order to have a solid global business platform, Brazil is an important market for successful U.S. food and beverage exporters.