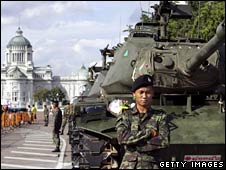 Athena Marketing International (AMI) recently traveled to S.E. Asia. We spoke with several individuals from Thailand and throughout the region. What is happening now in Thailand is unprecedented, and will have lasting repercussions for U.S. exporters.
Former Prime Minister of Thailand Thaksin Shinawatra was ousted in a military coup in September 2006 after nearly six years in office. Since then, he has been living in exile in London and Dubai. He has been accused of graft and faces a two-year jail sentence if he returns to Thailand. A telecommunications billionaire, the Supreme Court has stripped him and his family of US$1.4 billion due to corruption charges. Ironically, he is enormously popular with the rural poor in Thailand, who see Thaksin as a “man of the people.” He remains a very influential political figure in Thailand.
It is Thaksin’s “red shirt movement” – which he is funding – that has demonstrated mainly in central Bangkok and has caused havoc in the country, severely disrupting normal business activities as well as tourism. The “red shirts” have been accused of turning the constitutional monarchy in Thailand into a republic. It is directly challenging the country’s current power structure and political elite, and seeking the return of Thaksin. He has said publicly, “If the country and the people really need me, I will do it. I want to be part of the solution.”
Obviously Thaksin is infuriating the current government of Prime Minister Abhisit Vejjajiva, which is becoming weaker every day. Tens of thousands of “red shirt” protesters are camped in downtown Bangkok, but after nearly two months only a few of them have been killed by the omnipresent military police.
Below is live commentary from an AMI representative who went “inside” the red shirt movement yesterday:
“The red shirts cover a very large area in the downtown, central business and shopping district of Bangkok. It is clear that they are not going anywhere. The movement is well organized, with toilets, garbage collection, recycling, first aid, people cooking, vendors selling. Buddhist monks (clearly “red shirt” supporters) have set up an area for spiritual blessing. There are people from all over Thailand in the camps – it’s a complete mini-city!

The red shirt leaders have strategically placed loudspeakers around the entire area. They have their own radio station which broadcasts throughout most of
Thailand . The red shirts have won the hearts and minds of the people…civil war is in the cards.”
What does this mean for U.S. exporters? In the long term, not very much will change. Businesses will once again flourish in this entrepreneurial, hard-working country. In the short term, expect a decrease in normal sales turnover and consumer purchases, disruption of shipments, and a cautious approach to new product launches. Maintain a long term horizon, which is good advice for exports in general. Remember that Thailand has had 21 coups in the last 75+ years, but growth of 9.4% from 1985-1996 and 5.5% subsequently. It is a robust market for those who are patient.