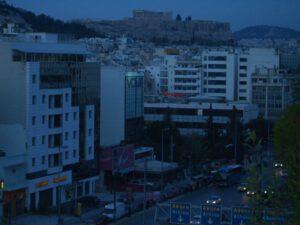 (ATHENS, GREECE) – The European Central Bank recently approved Greece’s revised Growth and Stability Program. It stated that it is necessary for Athens to achieve its target of slashing the country’s fiscal deficit (now over 12% of GDP) by the end of this year.
In the meantime, the European Commission on Wednesday adopted Greece’s fiscal cuts plan, but placed the country under surveillance, while it decided to start procedures against Greece for failing to deliver credible fiscal statistics in the past. That is, it may have deluded the EU by indicating that its debt was lower and revenues were higher than actual figures.
Today the Greek stock market declined 4.16%. Speculators are “attacking” Greece’s debt and bond market. Concerns over Greece weighed on all markets. The spread of the 10-year Greek bond yield over benchmark German Bunds rose to its highest since Greece adopted the euro currency in 2001. “Greece is a great problem,” said Giuseppe-Guido Amato, strategist at Lang & Schwarz in Frankfurt. “If the uncertainty related to Greece is increasing then you see the dollar firm against the bunds.”
That’s not all the bad news. Today the Euro fell to a 6-month low vs. dollar on Greece concerns. Oil fell below $74 a barrel after U.S. inventory data and lower than expected job growth, and equity markets worldwide declined on rising investor risk aversion. The recent rise in equity markets which seemingly indicated a trend toward growth has given way to what some analysts are saying may be a “second recession.”
Here in Greece, companies are bracing for higher interest rates, which make it more difficult for them to raise capital. This in turn may lead to lower investment by companies, which curtails employment growth. In addition to the private sector woes, the government’s austerity program means budget cuts, which also means lower employment in the public sector. This will make it more difficult for consumers to dispose of their incomes, which makes it harder for the economy to rebound from the current recession.
Could Greece be in need of a bail-out soon? Is it conceivable that the country could default on its loan obligations? Obviously, this is something the entire European Union is seeking to avoid, but today the Euro fell more than 1% vs. the U.S. dollar, signaling a flight from the Euro and tougher times ahead for the entire Euro-zone.
How does this impact U.S. exporters? Firstly, E.U. consumers may not be able to afford premium-priced U.S. food and beverage products. Secondly, a lower Euro makes U.S. products more expensive. Finally, there is the potential for protectionist sentiment during recessions and a rallying around supporting local producers rather than “unknown” foreign imports.
Like the Greek culture, however, on the streets of Athens one would never know there is a fiscal calamity surrounding them. Restaurants, coffee shops and bars are packed full of locals seeking to enjoy the moment. Like the Greek fisherman at sea, Greeks live in the moment. It is indeed a moment of truth for the country. Nonetheless, this civilization has survived and prospered for millennia – it will no doubt emerge from this one, perhaps somewhat bruised but no doubt wiser.